Mosquitos are some of the most bothersome flying pests and can drive you indoors, when you would otherwise be enjoying the deck or patio during the warmer months. Taking care of these pesky creatures can be a challenge. There are many chemical products available that kill mosquitos but they return as fast as they are killed. Then there is the matter of the chemicals used and their impact on children and pets enjoying the yard. We have evaluated and selected products that produce environmentally friendly options and provide long term relief from these obnoxious insects. 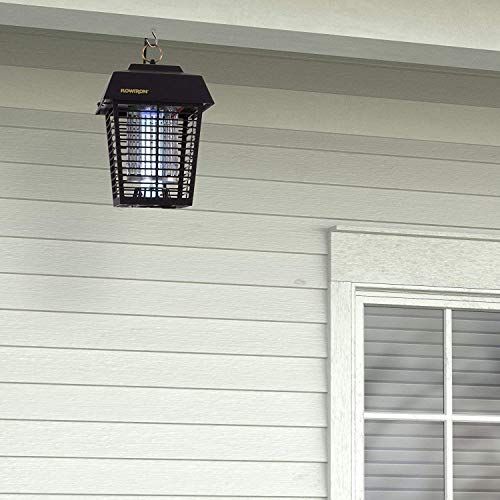 Flowtron-BK-15D-Electronic-Insect-Coverage insect trap kills mosquitos, flies and other insects with a nontoxic ultra violet light. This chemical free method provides freedom from biting insects that interrupt summer cookouts and enjoyment of the outdoors during spring and summer months. This electronic insect control has a non-clogging killing grid that prevents clogging and makes it more efficient for longer periods between cleanings. The cleaning is easy as the grid can be removed and emptied. The Flowtron-BK-15D-Electronic-Insect trap provides coverage for up to ½ an acre of land and should be placed close to where the insect problem is. It is recommended that it not be located next to the house, patio or deck, but around 25 feet out of the way of where you will be enjoying the outdoors. The instantaneous and continuous operation allows for continuous coverage. To save electricity it can be used during the peak hours that insects are out, which is generally from around 7 pm to 7 am. 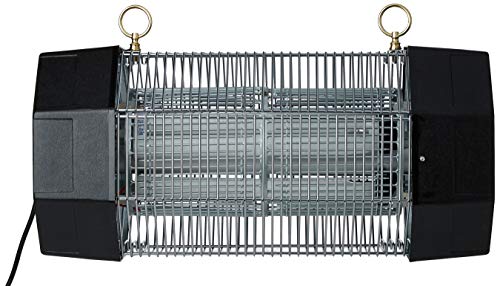 The Flowtron-FC-8800-Diplomat-Control-120Watts insect trap controls insects for up to 2 acres of land coverage. The 120 watts of UV power lure flies, mosquitos and other flying insects to the bug zapper. The Flowtron-FC-8800-Diplomat-Control-120Watts insect trap can mount either vertically or horizontally and can be used either indoors or outdoors. This has a great application for both barns and yards. The glow tube has a glo-panel that includes a reflector that provides the maximum attraction of flying insects and mosquitos. The killing grid generates 5600 volts of power creating a range where insects do not survive. The removable collection tray makes for easy cleaning of dead bugs. There is a 67″ power cord which makes it easy to plug into an outlet close by. An extension cord may be needed for mounting further from an electrical source. The outdoor grade plastic is made to withstand the elements. There is 360 degree protection with the Flowtron-FC-8800-Diplomat-Control insect trap. 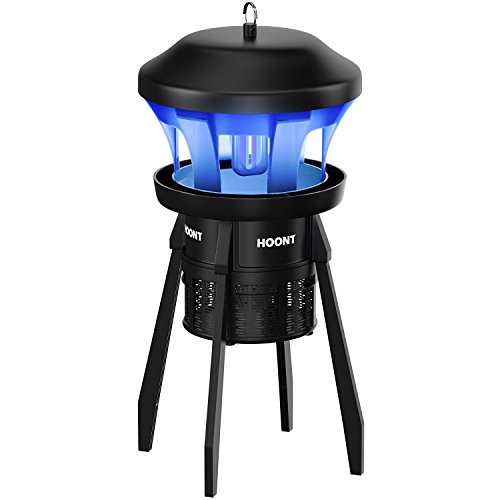 The Hoont Trap is a silent and odorless mosquito trap that attracts and captures mosquitoes and other biting insects. It works for large yards up to 100 square feet of land. The mosquito trap is easy to operate and it is recommended that it be run 24 hours a day at the beginning to break the breading habits of the mosquitoes. Yard placement is also critical when it comes to maximizing the effectiveness of the unit. It must be placed up wind of the mosquitoes and it must be placed in a clear area where there are no obstructions for the mosquitoes to be drawn to the trap. The patented trap creates a CO₂, heat and moisture combination that resembles mammals and attracts mosquitoes to the trap. There is then a vacuum that sucks the mosquitoes into a ridged net where the mosquitoes die. The Hoont Trap includes a 5 foot cord with yard clips to keep the cord from creating a yard hazard. The propane and magnet attractors need to be replaced every 21 days to be effective. The Hoont Trap comes with a 1 year warranty. In this day and age, the value of health and safety cannot be taken for granted. With busy appointments and stressful schedules, the human body becomes vulnerable to every kind of disease and contagion. Without the proper supply of nutrition and vitamins, and the increasing hours of sleepless nights, the body’s natural ability to protect itself from disease is affected. The risk for infection and diseases is also significantly much higher for younger children since their bodies are still growing and their levels of immunity are still at a much lower range than that of adults.

Among the riskiest dangers to a person’s health – young or old alike – is exposure to mosquitoes. These blood-sucking insects are known to carry numerous types of infectious pathogens such as the dengue virus, malaria parasites, and the recently discovered chikungunya virus.

The chikungunya virus, while easily mistaken for the infamous dengue virus, poses an entirely novel and different health risk due to its ability to cause debilitating joint pain which could last from a few days to several weeks. The virus also drastically decreases the platelet count in blood cells. It is also a very infectious virus which, in some cases, is capable of transmission from mother to fetus whenever a pregnant woman is bitten by an infected mosquito.

Not only do mosquitoes pose a dangerous threat to the health of every person exposed to them, but these insects are also known to breed at an exponentially fast rate in damp, dark, and urbanized areas. As such, it is of utmost importance that homes are disinfected and thoroughly cleaned of possible breeding places for mosquitoes – especially for areas which frequently have large supplies of stagnant water. However, merely cleaning a place up may not always be enough. The surrounding area could be potential breeding areas for mosquitoes. There are also instances wherein parties involving children have to go out to places where there are higher risks of getting mosquito bites – such as family trips out into the woods for camping.

Instead of acting like a wet blanket by going paranoid over going out on nature tours, the best thing to do is to bring along a handy amount of mosquito-repelling lotion and a reliably effective mosquito trap.But with an overwhelming number of choices readily available in the market, finding the best trap to suit every need can be a challenge in and of itself. The best way to go about it is to consider several points before spending time and money on a reasonably effective (or ineffective) mosquito trap. This buying guide will provide shoppers with the details on the traps that are available on the market and to quickly determine which products best serve their mosquito prevention needs. What to Consider When Purchasing a Mosquito Trap

It is important to consider not just the price of the product to be bought, but also the price of keeping up with its use. Propane traps could consume a tank of propane every 3-4 weeks and refills could be more expensive. Electric traps, on the other hand, are considerably cheaper to use and to maintain. Traps which operate on a 12-volt system are more economical to use since they only consume less power than an electric light bulb. To reduce running costs, look for traps which have programmable timers that could be set to activate during peak mosquito hours.

There are several trap sizes, so it is essential to consider how big or how small an area is before a trap is used. Determining the size of the trap and the number of traps to be used depends primarily on the scale of the property covered, the number of mosquito breeding sites and their locations. A trap works best in a small area, but it would not function very well in a large and heavily infested area. As such, more traps may be needed when they are to be used in a much greater area. Reading through the manufacturer’s recommended area of coverage is important. Some products claim to reach more than 1.5 acres while others could only cover an area as small as a yard.

It is important to check the label and determine the potential hazards a trap may pose. Some manufacturers use propane to generate CO2, heat, and moisture to attract mosquitoes. Proper care must be given when using these traps because they could be potential fire hazards. Traps which don’t use propane are much safer to use, especially in areas where children more or less pass through.

It is best to consider the wind speed and direction when placing mosquito traps in certain locations. Several trap owners address this problem by setting multiple traps in different corners of the area to be covered. That way, there is a much higher chance of catching more mosquitoes without the need to worry about the wind movement. They should never be used indoors. These traps use electricity, CO2 gas plumes, propane, and other harmful chemicals. It is important to keep them away from areas where people gather. Hence, they are best used outside the building and out of the reach of children.

Several traps work well enough to start as soon as there are mosquito activities within the area. However, this does not assure that every mosquito in the area is trapped and accounted for. It takes 6-8 weeks of continuous use to decrease the mosquito population within a vicinity and interrupt their breeding patterns. It is best to plan, especially when expecting to conduct outdoor activities like barbecues or camping in the yard. Start using the traps weeks ahead of these scheduled activities to avoid any untoward risks of mosquito bites.

These considerations merely serve as guides to help choose the best mosquito trap to meet every need. There are several products out there in the market, but it is important to note that one cannot rely merely on these traps for protection. It is best to ensure the optimal protection by using mosquito repellent lotions and to consistently make sure the covered areas are disinfected thoroughly. It is also best to communicate with neighbors to minimize the numbers of mosquito breeding places.